I remember the story of a pastor who was preparing for his Sunday morning sermon for his parishioners. His little son could not allow him to concentrate on what he was doing. So, he decided to find something that will constructively engage the child, while he focuses on his sermon preparations in peace. He called his son and gave him an old newspaper centrespread containing the map of the world. He tore it into pieces and told him that if he could arrange the map of the world together and well, he would be handsomely rewarded. The little boy was so excited at the challenge. The pastor thought that by giving the little kid such a difficult task, he (the pastor) would have finished his sermon preparations before his son would ever solve the puzzle – that’s if he would be able to solve it. Five minutes later, the little boy told his dad, the pastor, that he had finished. The pastor could not believe that. He knew he had a smart son but not to the level of fixing the map of the world torn into several pieces in a very short while. The boy was laughing at his dad’s bewilderment. When he asked the boy how he did the magic, he said that he saw the picture of Jesus, then, the map and thought to himself, “I do not know how to fix the map of the world. But if I can fix Jesus, then, the map of the world is in place.”

From the story above, putting God first in his place can help us solve different puzzles of the world. This is exactly the message of this Sunday from the Lord. Jeremiah, in the first reading, says that, “Blessed are those who trusts in the Lord, whose hope is in the Lord…Cursed is the one who trusts in human beings, who seeks strength in the world.” Putting God first above everything is a sign of trust in the Lord. And blessed is he or she who does that. The little boy in the story above decided to fix God first and that was how he was able to fix the map of the world. We do not put the cart before a horse. God first. First things first. If we trust God, everything else will bring blessings for us. The Bible says that everything works unto good for those who put their trust in the Lord (Romans 8:28).

So, what is our hope? Where is our investment? Where is our heart? Where is our greatest love? In God or in the world? The Bible says that, what shall it profit a man to gain the whole world and lose his soul? (Mark 8: 36). So, who do we put first in life? God or the world?

Life is like chess. In a chess game, if you happen to lose your king to checkmate, you lose the whole game even if you have all your other pieces left. You win the game if you are able to find a way to checkmate your opponent’s king. It does not matter whether you have only one little pawn to do it, while your opponent has all his pieces left on his side. Life is like chess and God is the King. If we lose him, we lose the game or the plot.

The Bible talks about “the poor in spirit” (Matthew 5:3). One can be a rich person in life and still be poor in spirit. We become poor in spirt when are able to detach ourselves from our material possession. That is why the gospel of today says, “Blessed are the poor. Woe to you who are rich.” So, the rich, here, are those who put their trust in themselves or in other things apart from God. St. Augustine said, “If you have God, you have everything, even if you don’t have anything else; and if you have everything else but you don’t have God, you have nothing at all; and the one who has God plus everything doesn’t have anything more than the one who has God alone.” 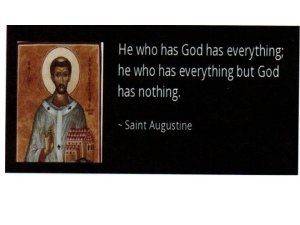